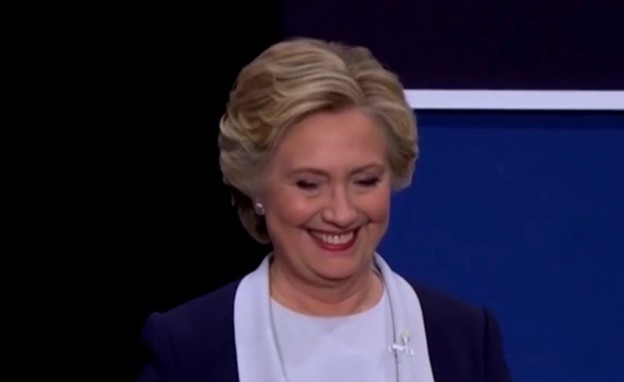 Like everyone else, I am all-consumed watching and hearing you in this ferocious race to the United-States Presidency.
As a synergology specialist in body language, I have analyzed you objectively several times through the frenzied presidential debates with Donald Trump. The posture, the gesture, the arms, the hands, the voice, the micro-reactions of the face, amongst others, reveal blended moments of inner well-being, stress, in-coherences and the unsaid. We cannot command our body language for it is the reflection of our internal self-state.
Generally speaking, you demonstrate strength and rigor. It is so re-assuring to observe at what point you try to be fair and maintain interaction with others. These others appear to have great importance in your eyes and not only in the potential that they represent as electors: it speaks volumes on your humanity which you project so well.

In the context of intense stress where everything is prepared and calculated, you have succeeded brilliantly in exploiting real spontaneity within some of your interactions. Hats off to you for this! Even during the last debate which appeared to be more of an arena bullfight than a game of politics with your adversary encircling you as would an angry bull ready to charge, but in spite of the palpable tension and the visible uneasiness on certain subjects, you remained well-composed and collected.

As for the element of your communication, your words and body language remained coherent as to the ideas that you defended. However, when you evoke sensitive topics where end-results do not uniquely depend on your actions, a certain disassociation is visible from your body language as to words stated, for these must totally be in alignment with the position taken.

You hold in your hands all the necessary elements. Your message resounds: that of a politician who carries a long-term actual vision with a well-defined role: to become President of the United-States. Do not remain content to just pass on your message, transcend yourself to become the message itself.

Some may claim that our society has achieved equality between man and woman but this still remains untrue when a woman must constantly prove that she is equally qualified for the job. YOU have already proven yourself qualified and should not have to prove that you have the caliber, for you already have it.

The body does not cheat.
I will therefore not tell you how to dress, nor if blue is the right color for you in lieu of gray, I just simply want to say:
Whatever impact you wish to have on others, in whatever colossal stake that this election represents, at the approach of the final sprint, show all who you are, be entirely and none other than, Hillary Clinton.